The major goal of our research is to understand how centrosomes and in particular centrioles are regulated in different tissues during the development of a multicellular organism. In proliferating cells, a pair of centrioles recruits the surrounding pericentriolar material enabling the nucleation of microtubule arrays and the formation of a bipolar spindle. In differentiated cells, the fate of centrioles varies in a cell type specific manner.  For instance in many somatic tissues centrioles template various types of cilia (projections of the cells that carry signaling, sensory and motile functions). During gametogenesis, the fate of the centrioles depends on the sex of the gametes. In most studied metazoans, centrioles are maintained and contributed to the zygote through the sperm. In contrast, centrioles are eliminated from the maturing oocytes.  Molecular mechanisms by which centrioles are regulated in a cell type specific manner are largely unknown.  We use a variety of genetic, cell biological and imaging approaches to study the regulation of centriole dynamics during the development of the nematode Caenorhabditis elegans. 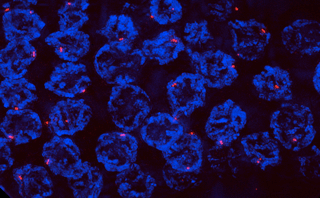 Centrioles in the pachytene region of the gonad
(centrioles stained for SAS-6 in green, SAS-4 in red, DNA in blue)

Many human diseases and physiological conditions, ranging from tumorogenesis to ciliopathies and microcephaly have been attributed to abnormalities in centriole biogenesis and dynamics. Thus, in addition to providing answers to fundamental biological questions, our work also facilitates the understanding of human diseases. 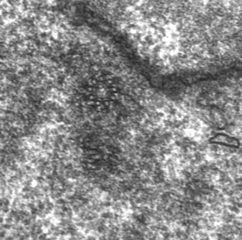 Image of a pair of centrioles in the gonad of a hermaphrodite worm
taken by transmission electron microscopy.